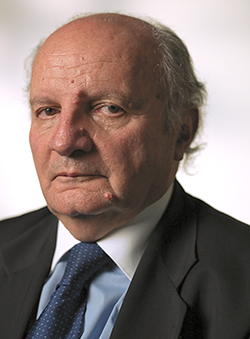 Mr. Jakob Finci was born immediately after liberation of his parents from Italian detention camp on October 1st 1943, in an old Jewish Sephardic family, which arrived in Sarajevo in the mid of XVI century after the expulsion from Spain.

After high school, he graduated from Faculty of Law in Sarajevo, and from 1966 was a practicing lawyer, specializing in international commercial law.

All this time he was also active in Jewish Community and at the beginning of 1991 became one of the founders of the reborn Jewish cultural, educational and humanitarian society LA BENEVOLENCIJA, he was elected as the first Vice President.

“La Benevolencija” was, during the war, the only Bosnian humanitarian organization working as an implementing partner for UNHCR, and was one of the most successful NGOs, helping all citizens of Sarajevo and Bosnia Herzegovina on a non-sectarian basis.

From September 1996 until April 2000 Mr. Finci was the Executive Director of the Soros Foundation – Open Society Fund for Bosnia and Herzegovina.

Since 1994 he is a member, and from February 2001 to April 2002. he was the President of the Association of Free Intellectuals Circle 99.

In 1997 Mr. Finci was one of founding fathers of Inter Religious Council of Bosnia Herzegovina, and for two years served as the first President of the IRC, fulfilling the same function again in 2003.

In May 2002 Jakob Finci was appointed by the High Representative to be first director of the State Agency for Civil Service, an appointment which was confirmed by Council of Ministers, and in March 2008. was named as the Ambassador of Bosnia and Herzegovina in Switzerland, and non resident ambassador to Lichtenstein.

On a professional level, Mr. Finci worked as a corporate lawyer for one of the biggest (at that time) Yugoslav exporting companies-Energoinvest, in Bosnia Herzegovina, Ethiopia and Kenya.

On academic side, Mr. Finci was working as a tutor at the UN University on the ECMIR project between 1988 – 1990, and since 2001 lectures at a interdisciplinary postgraduate studies program at Sarajevo University.

As the only Bosnian representative, Mr. Finci is a member of the Advisory Council of OSCE -ODHIR’s Panel of Experts on Freedom of Religion or Belief.

At the same time he frequently lectures on different topics, such as international commercial law, privatization, conflict resolution, interethnic coexistence, as well as about matters as the organization of humanitarian work, fund raising, Judaism, etc.

For his work, Mr. Finci has been decorated several times.  These honors include:  the Grand Cross of the Order of Merit of the Federal Republic of Germany as well as the American decoration First American Freedom in Richmond Virginia.  He has also been named Chevalier de la Légion d’Honneur of the French Republic, and in 2009. he was proclaimed “Person of the Year” by Sarajevo’s daily newspaper SAN, and Man of the Year for 2013 by Bosnian daily “Večernji list”. Jakob Finci received International Prize Primo Levi in 2013 in Genoa – Italy,