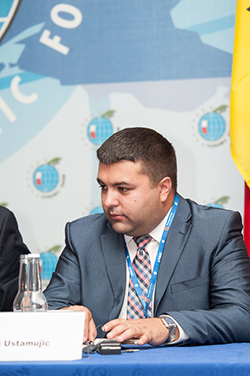 Mirza Ustamujic is the Chairman of the Executive Board of the America-Bosnia Foundation. He was the youngest directly elected Member in the House of Representatives in the Parliament of the Federation of Bosnia and Herzegovina in the 2010-2014 mandate. During his mandate he was proclaimed as the one of the best MPs in the Bosnia and Herzegovina by the CCI, a leading NGO that follow activities of all elected MPs and ministers. His focus was on anti-corruption and especially the fight against system corruption, party influence and the de-politicization of public companies; as well as economic development and youth issues. He was also a member of the Expert Commission that led negotiations for a possible solution of the “Sejdic-Finci” case in Brussels with the European Commission, and he also proposed amendments to the FBiH Constitution to stop acts of corruption becoming outdated. Before his tenure as a MP Mr. Ustamujic was the Sales Director for the Nokia Authorized Distributor for Bosnia and Herzegovina.

Mr. Ustamujic holds a B.S. in Telecommunications Engineering from the Faculty of Electrical Engineering – University of Sarajevo. Since 2013 Mr. Ustamujic is an Alumni of the Schools of Political Studies of the Council of Europe. He has participated in numerous regional and international conferences as panels.

He is married with a one child.